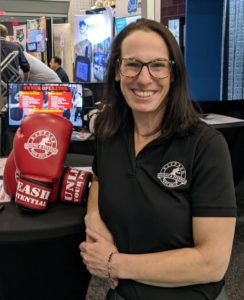 Lissa began her career in the fitness industry back in 2003 starting as a Front Desk Associate for a large Corporate facility.  She began Kickboxing in 2005, started and had her first amateur Kickboxing match in 2006. Lissa has competed over 20 times in different styles of Combat Sports including Muay Thai, International Rule, K1, and Full Contact Kickboxing as well as Bare Knuckle Karate,  Mixed Martial Arts and Boxing.

She retired in 2009 after her 4th MMA bout due to ongoing health issues, but made short a comeback into Boxing in 2012 after meeting Coach Keith Keppner.  While most of her Combat experience is in Muay Thai and Kickboxing, Lissa had always had a fondness for Boxing and a strong desire to compete in the Sport.  She retired again due to her health in 2013.

Lissa also worked as a Boxing, Kickboxing and Fitness instructor and managed the facility she trained out of for 9 years. After retiring from competition, she began to focus solely on the development Keppner Boxing as a successful business.  Lissa specializes in the development of systems and processes and has a passion for ensuring the success of others.